This is the most current result

Here are the last 10 results in graphs 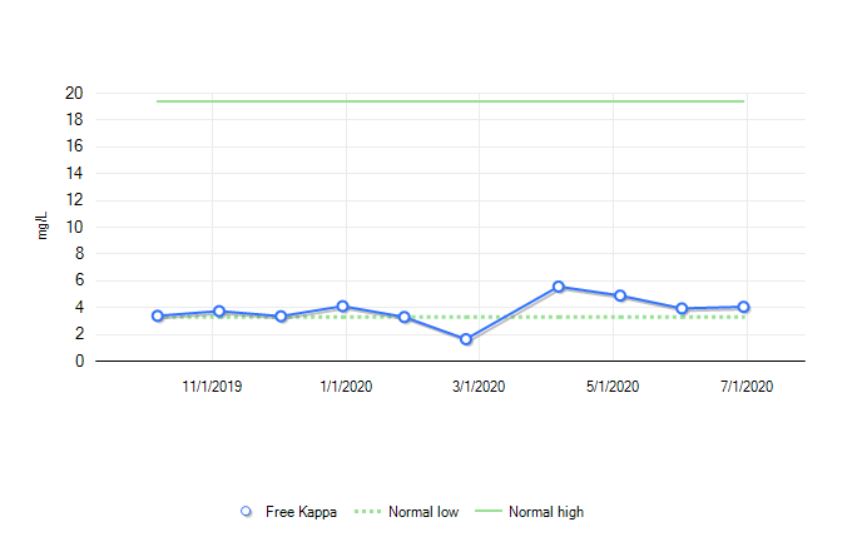 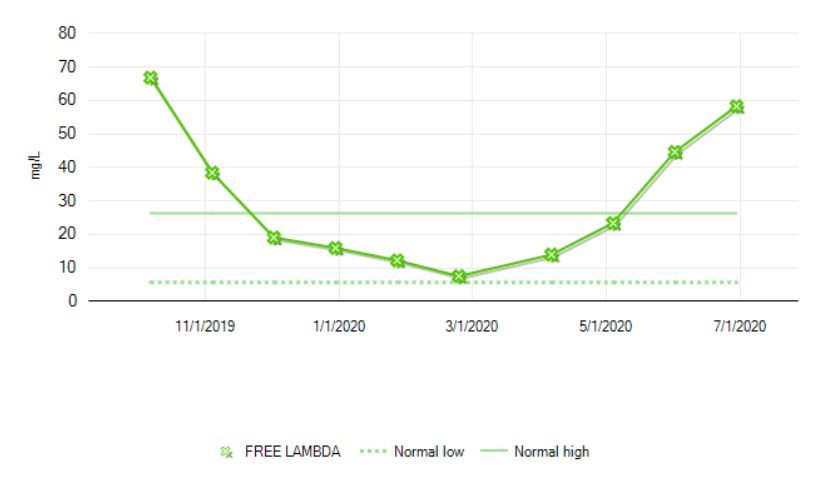 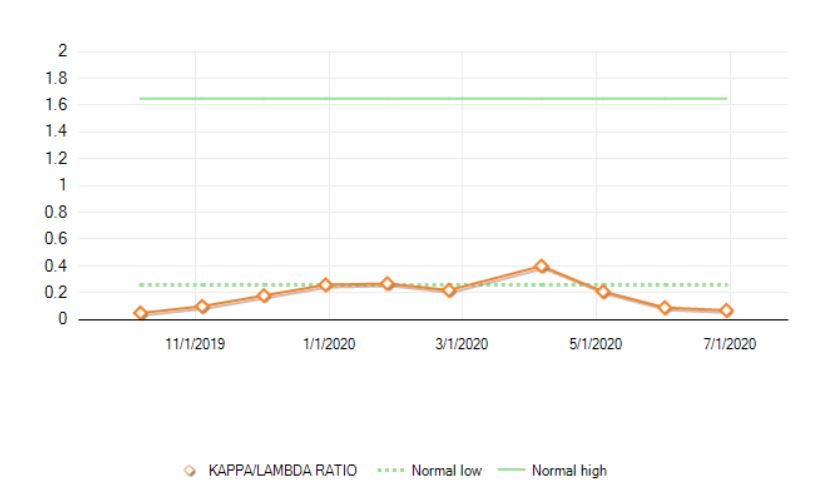 Sorry I haven’t updated the blog in a long time.

I did pretty well (number-wise) on the carfilzomib/cyclo/dex protocol.  I did feel kind of crummy after treatment, though. By February of 2020, my doctor decided I could do a few more cycles and then go on maintenance.

Because of the pandemic, I was put on maintenance therapy of just carfilzomib every other week in March. That way, my visits to the clinic would be limited.  More so than the twice a week for 3 weeks every month. My doctor even moved my treatment to a satellite clinic in another town so I could avoid contact with so many people.

I’ll post some test results soon.  Thanks for hanging in there.

First Round of Carfilzomib and Cyclophosphamide Results

Even after all this time, I’m still not sure how to take the free light chains results.  I’m not a science-y person.  Dr. Rodriguez says that there’s been an improvement. This is the result from last week’s blood draw.

When I became aware that I had myeloma, the FLC test wasn’t used. We just looked at my m-spike(s) and quantitative immunoglobulins. It was a pretty simple way to see what was going on.  The FLC test is much more sensitive, so it’s a better diagnostic tool.

Results from July, 2019 for comparison. 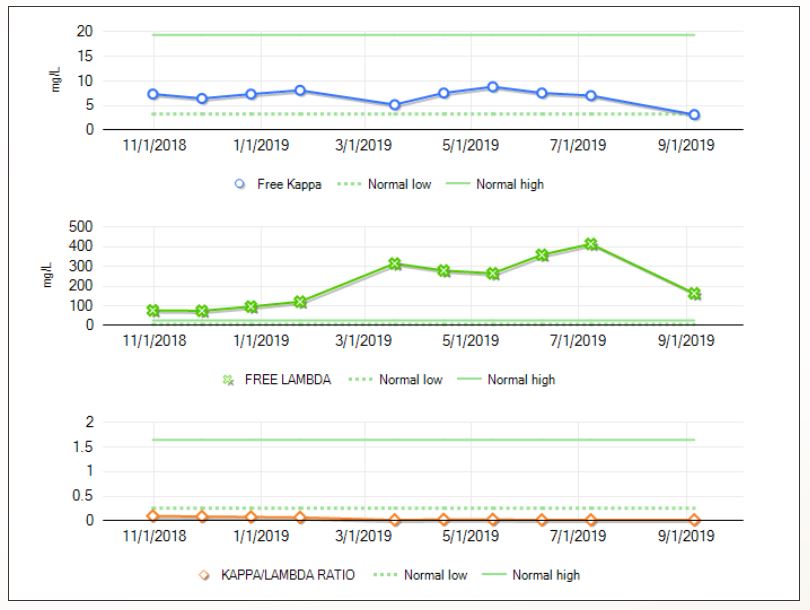 The first cycle has been ok.  There’s a long list of possible side effects, but I haven’t experienced anything harsh. I have chronic gastritis, so that definitely affects how my stomach feels.  Were it not for that, I might get by with just the dex side effects.

For me, dex produces very predictable side effects. On the day I have it, I feel really speedy and I sweat profusely! I have trouble sleeping that night, so it’s not unusual for me to be awake until 3 AM.  Usually, I will sleep a few hours and be ok with that. The next day, I can be extremely grouchy. My face will be red.  The day after that, I feel exhausted.

It’s amazing that in the early days of my treatment, I would have to do what they called pulsed dex.  I would take 40 mg of it each day for 4 days, then have 4 days off.  Then I’d do it again. And again.  It was torture.

This week I have no treatment.  That’s how it’s scheduled.  Three weeks on and one week off. I’m happy to have this break.  I’ll let you know how the next cycle goes.

I recently had a change in my dara schedule. I had been going once every 4 weeks, prior to this month. My doctor decided to have me go every 2 weeks, starting this month (April, 2019). He wanted to give that a try because of an increase in k/l ratio.

I still have a pretty low level of disease, so we’ll see what the change in treatment frequency does. One of those weeks

I’m having one of those weeks in which I feel exhausted at the cellular level.  It wears me out to speak, even.

I have new labs to post, but it’ll have to wait until I have a bit more energy.

I think this has been building for a while now.  I decided that I’m going to go back to the University of North Carolina at Chapel Hill Cancer Center(UNC), to an MM specialist, for management of my case.  I want to be sure things are handled properly from now on.  I had switched to a local heme/onc practice for convenience, but was alarmed at the apparent lack of experience expressed in casual comments the doctor made. As you know, myeloma is not something you want to mess around with.  I believe every effort should be made by the patient to get the best care possible for the best possible outcome.

In the meantime, here’s a picture of a kitten.